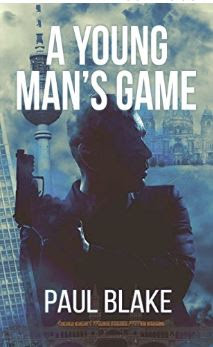 Anyone who has been following my reviews, or possibly even my Twitter feed, may know what a fan I am of comic books. What I have not divulged really, is my deep love of spy stories. Espionage and intrigue plots are things that I have adored for years, but sometimes those spy stories are less about the spying and more about the fights. In some of the books I have read recently, they have comical gadgets, other times they are just about punching people or stabbing someone with weird things.  Which got me thinking one day long ago, what if Bond had ever actually aged to about sixty years? And because he was old, likely confined to some desk somewhere, he had to suffer through his pains. Well, I’m very glad I found a book that gave me a kind of way to live those thoughts out. No, this is not James Bond, and this is not your mama’s MI5 spy book my friends. Get yourself a stiff drink, preferably Remy Martin, turn your phone off and dismantle it and stay tuned for a review of Paul Blake’s “A Young Man’s Game”.

Opinion
Paul Blake is a wonderful writer, and I knew that long before he followed me back on Twitter because of some of the reviews I had seen of his work. He’s very posh, and I think that he’s a gem of a human. Like all Twitter magic, one day he followed back and in that time we have shared banter all this time later. He asked me to review his book and specifically said “Be brutal”, and give him an honest review. Brutal was the word he used. Challenge accepted sir. I fired up the old Kindle and picked up his book from Kindle Unlimited.

I told you earlier, I love intrigue and espionage. The reason that “Captain America: The Winter Soldier” was my favorite Marvel film has everything to do with the spy story. I love a good story that involves multiple sides, no one really trusting each other, and especially hiding and seeking out things. Paul delivers in this story on all those fronts. There is one amazing plot that starts from a desk job and takes us all the way to the end.

Let’s talk about the most positive element of this story, the fact that the reader can smile and laugh but it’s not for comical reasons. It’s for reasons of levity because of the believability and realism in the actions. There is a truly grounded feeling of reality in this and it’s the kind of reality that is accurate for what I am used to. Sarcasm, light jokes, lots of silly situations, people getting hurt, lucky ways in and out of things all mix with darkness, bad things going wrong, and of course going down that wrong corner or talking to the wrong person. The way he threads his protagonist through this maze of intrigue is great.

Intrigue is best when it has a lot of layers, some thick, others thin, but there have to be layered for the protagonist to get through to get to the point. And in those layers, there has to be pain and also wins. Paul has this down, and as he wrote it out, it’s pretty close to effortless. I don’t think with how well this is fused together, that you can plan this exactly. I mean I’ve written a couple of things, and I’ve used outlines and such, and I have no idea what Paul does for writing, but this feels very flowing to me. I don’t see stagnant “Do this, now do this, now do this” in the book that you sometimes get with intrigue plots. Nothing of this is formulaic in that sense, it’s just this beautiful story that moves as well as music does over sound waves.

The protagonist Alec Foster is lovely. He’s not a buff and rough kind of man like the Bond’s usually are, nor is he anywhere near a Jason Bourne. No, he’s like someone’s middle-aged going close to retirement ol’ uncle. This is a man who has lived a hard life and, is drinking his regrets and probably smells horrendous when he’s not paying attention to himself. But he has this charming sort of way about him that I found very endearing and obviously others do too. It’s the kind of thing that likely would upset people, but I just love the duality in his character. I also love a character that gets winded and feels actual effects to physical exertion. That’s a pet peeve I have sometimes with Action stories. If guns need bullets, people need to breathe and catch their air, or pause and rest for a minute in a realistic way. Paul did that. He didn’t make some superhero out of an older character, he made something believable.

To compliment him, come some lovely secondary characters, a dynamite subplot, the funniest tourist situation I’ve ever seen in a book, and of course, a who-dun-it in the middle of everything. I don’t want to spoil this book for anyone so I’m going to stop layering out what happened, but I will tell you that it’s worth the read.

Okay, so what did I find to criticize, he asked me to be brutal, remember? For one thing, he borrowed from an AARP article to take a quote from Bob Dylan. How dare you! Bob Dylan? Why not Don Rickles?

I’m kidding, I hope you all know that.

Getting serious now, I have a couple of criticisms that I noted here and they are really more like stylistic nitpicks that I noticed from reading on the e-book. Judging from the closing of the book, I don’t think this is Paul’s fault necessarily, it has to do with whoever formatted the book for the e-reader and mobi copy. I am sure that if you read this as a hardcopy or paperback, it might not be noticeable as much as it is in e-book with the lighted backdrop. There isn’t a lot of space, nor is there a lot of separation between normal and italicized fonts.

Considering the amount of internal monologue going on, and I think that would have been easier for my eyes to read if it had been in its own paragraphs when there was a lot of it. After a while, for a speed reader like myself, things can blur. I think I logically should have been able to read the book in about 3 to 5 hours, but it took, me a tad longer than normal because of occasional blurs. I don’t mind italics in the case of delineating between an internal discussion and normal writing, but if it’s a lot of an internal monologue, it’s just easier to read in a chunk by its own self instead of mixed between actual narrations.

If I were going to nitpick, eh the margins are okay, but the indenting is kind of short. Also, there isn’t a lot of spaces between paragraphs. That’s it. That’s my big nitpick. That’s nothing, and I assure you the only reason I’m bringing it up is I noticed it. It’s minor, even by the most exacting of standards. And to be fair, I’m not sure any editor would have really picked up on it, this is just a visual thing I saw because I was reading on the kindle.

Onto the structure and greatness of the story. It’s a complete beginning, middle and ending. The pacing was fun and the tension was just right. The character arcs are well defined. There are payoffs to each and every little thing that was brought up in the manuscript. I didn’t find a single plot hole or problem, and the conclusions were well defined. There was a good conclusion to the story which had a bitter component to enjoy the sweetness of the end. Mostly and probably the best part was the climax was amazing. What I enjoyed, though some of it was off the page, was how it was done. It was realistic that a man like Alec would get this kind of a conclusion to the conflicts and the scene setting was great. I’ve never been to Berlin, but the way it was described sounded lovely. When food was mentioned it sounded delicious when drinks were mentioned, I wanted to drink them. Love in this story is deep, and I enjoyed how it played out. Pain descriptions were also deep and detailed.

This is a great story, intrigue or no intrigue, this is just a marvelous tale to read. I needed this book to end my week, it was perfect for a day like today.  This is the kind of book I wish my grandfather was still alive to read. I think my grandpa would have LOVED this book. In fact, I’m sure of it, and I read it the day after his birthday. I can’t think of a better book to remind me of another wonderful man who lived a hard life and also loved good spy stories. I know he’d love this one.


Score
96/100 guys, this lovely story is so good, and you should go out and get a copy of “A Young Man’s Game” as soon as you can.  I will add this to my recommendations list because I think that people who love spy stories will like this one. That is a five star on Goodreads and Amazon.

The Stats! Last 30 days this many people visited my site! Thank you for reading!

Want to know the score?

[Know The Score] How I score a book review, more than stars are involved.

Mrs. Y's Book Reviews Scoring System Hello, all you wonderful reading friends out there who follow me and are interested in my revi...

The Most Popular Reviews by Y

Not Taking Review Requests At This Time

Hello Friends, Authors, and Writers alike!
I am not currently taking requests for reviews. If I change this or open them back up, I will post my update right here.
Thank you for your understanding.